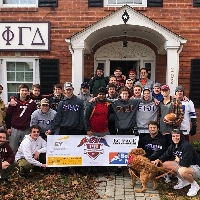 The FIJI Run Across Virginia is a cross-state run culminating in the presentation of the University of Virginia vs. Virginia Tech game ball at their annual football meeting in late November. The running of the game ball has become one of the largest student run philanthropies at either school and benefits The V Foundation for cancer research. Participants in the run are members of the fraternity of Phi Gamma Delta (FIJI), and come from both the UVA and Virginia Tech Chapters. Not only are these FIJI brothers the creators and operators of the run, but they are also the primary fundraisers for the charity. In 2018 and 2019, the combined efforts of both chapters raised nearly $60,000 and brought the event total to nearly $600,000.

Starting in Blacksburg, the brothers from Virginia Tech will run the game ball towards Lynchburg. Once they reach Lynchburg, brothers from The University of Virginia will take over and carry the ball the rest of the way to Charlottesville. The ball is run by one brother at a time, each choosing their own distance, before handing off the ball to the next runner. Participants are carried on a tour bus that follows the runners along the route.  The bus is also a method for presenting the FIJI Run Across Virginia Sponsors.  For safety, police escorts have also been set up along the entire route.